Ok, I'm not gonna lie to you guys- I only read this one because it had a subtitle and I needed that for my challenge. (The original book I had bought for this prompt turned out to be 700 pages long and really "heavy". I still totally plan to read it, but it's gonna take some time.)

First off, I'll start by saying that I do love James Patterson. I fell in love with the Alex Cross books in junior high, and there are too many one-offs that I like to count. So the idea of his "BookShots" confused me a little bit.  I mean, a James Patterson book is sort of a "forget sleeping because I need to finish this book ASAP also when was the last time I peed I can't remember, do I have a dog?" kind of experience. Why would that need to be streamlined? But, especially in today's world of click bait and Tweeted news I sort of understand now. The concept is still the same, what has been wheedled down is the character development and depth of the world you're in.  Those things don't seem very important to a lot of readers these days so maybe these things are the future of literature, who knows. (His accountants probably know.)

Ok, so back to the book at hand. The premise (if you don't feel like clicking through and reading it on Amazon) is sort of weird: a pair of crooks decide to swindle a bunch of rich people on the latest luxury ship (the Titanic) in what they are apparently hoping will be  their lucky year 1912. It turns out there is also ANOTHER swindley plan going on in the background so of course those two are going to end up screwing each other over. BUT THEN (and here are major spoilers!) the boat starts to sink! Heavens! I hope it will turn out ok!

The very nature of a "BookShot" means two things: it was very readable because it was basically nothing but action; and it was sort of a poor example of writing because it requires little more than the part of your brain that says "and then he goes pow! and then she runs real fast but THEN..."

So in general, I think the BookShots are ok, but this one is... a little blah. Maybe it's because I knew the ending before I started. 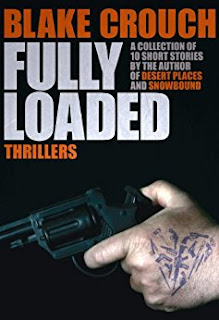 This one is a book of short stories, which normally I don't go for; but lately, I've been having a lot of trouble moving on when I finish one book (#BookHangover) so a short story from Crouch was a great palate cleanser... kind of like a creepy grape between courses.

Blake Crouch, if you are unfamiliar, writes a lot of creepy-in-a-realistic-way shit. His style of creep speaks to that darker side that all of us have. Each of these short stories is drastically different, but still each creates a fabulous world. I was really impressed by the multiple stories where I didn't see the twist coming until the last second, which, it seems to me, must be way harder than in a full sized book.

If you're looking for variety, or love thrillers and mind benders- definitely check this collection out. (You can also get most of the stories individually on Kindle, if you think you're only interested in one or two.)

Ok, so my decision to join the Book of the Month Club was a GOOD one because I have loved EVERY book so far. Evelyn Hugo was no exception.

The basic gist is that a wet behind the ears reporter is hand picked by an elusive, Elizabeth Taylor-esque former starlet to write a no holds barred tell all biography about her- including all of the sordid details about her seven sensational marriages- which up until this point in her life she has refused to comment on. But, as the story of her life and ambition unfolds, the reporter has to wonder- why her?

I cannot think of a single complaint about this book. Reid masterfully creates the world of golden era Hollywood, which we live and breathe every second of through Evelyn's assent to the height of stardom. I was swept up in the glitzy gilding, and then rolled over by the murky slime hiding beneath, just as so many hopeful actresses of the day were. Despite some questionable moral choices on Evelyn's part, I not only rooted for her- I understood why she made those decisions, I respected the purpose and drive behind them to get what she wanted from the world.

She isn't the only character who is well fleshed out; Reid gives life to all of her main creatures (a depth that is often lacking with modern authors.) The relationship that we see develop between Evelyn and Monique is riveting, and I genuinely felt a need for them to become closer, to create a friendship that I could live through those words.

The timing of this book is also interesting, with so many people concerned with the rights of women. Evelyn realizes at a young age that her body is a tool: she can use it to manipulate, to get what she wants, and as a weapon against others.  As she traverses the Hollywood landscape, she sees that men are "scamps" where women are "sluts", and that the repercussions of the same choices are very different when a woman is the one in question. (An excellent reminder that slut shaming goes much farther back than the age of Facebook.) Yet, instead of letting that get her down- or rather, keep her down- she uses that world's weaknesses to her advantage, coming out back on top. In the political climate of today, that is a powerful message for women: your body is your own, make your own choices, be your own person.

I would recommend this book to absolutely anyone who is looking for their next read. There's a little romance, a little intrigue, there isn't any sword fighting (Sorry about that, Helen.), but it is still one hell of a ride!

So, I don't know how popular my opinion on this book is going to be, and part of the reason is because of Hulu.

Alrighty, so if you've been living under a rock, this book is about a dystopian society which is slowly revealed throughout the book to be virtually barren.  The titular Handmaids are the women who have been shown to be fertile, tasked with helping to repopulate the human race (or, Gilead at least) with the most elite males of society. (As in, you're with a guy till he knocks you up, then on to the next. These are the guys with money. Shock.) They are forced to wear red, showing every person they come into contact with that they are to be "revered ". Except that... No one reveres them. The other castes of women, Wives (self explanatory) and Marthas (maids) look down on the Maids as being slutty (as if they aren't under threat of death if they don't go and do who they're told).

I'm not going to give an entire plot summary for you, you can just read the damn book because you should anyway, whether I'm a huge fan or not. At first I was really irritated that the circumstances of this world were shadowed for so long, that pieces of information were given out bit by bit without context. Probably because I was a bad girl and started watching the Hulu miniseries before reading the book. (I didn't want to... Amazon made me... They didn't add the book to their Prime reading until after I was halfway through the show! TOTALLY not my fault!) I already knew a lot about what had happened and why she was in the situation she was in, and with the dull writing style, the monotone and detached narrator was hard to concentrate on sometimes.

Anyway, my overall takeaway was this: the concept is amazing, but I actually think it was executed better in the show than the book. The ability to use visuals gives a whole new level, a level I found myself yearning for while reading. Seeing where they use reds, where they use blues, where they use blacks, the execution of cinematography. Obviously I wouldn't have this complaint if I had read the book first.
I still think this is a must read for everyone, but maybe do it the way you're supposed to and wait until AFTER you finish the book to watch the show.