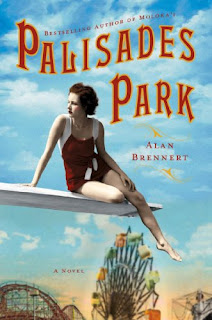 This book is so amazing, especially having grown up in New Jersey! It is a little slow to start, but if you get into the rhythm, you'll end up with a really amazing story about family through the generations.
The Book
🌹🌹🌹🌹
The Writing
🕯️🕯️🕯️
Readability
Cogsworth
🕰️🕰️🕰️
at April 16, 2017 No comments:

The year started off with "A book that takes place on an island." I decided to go with An Untamed State by Roxane Gay, which had come up as a suggestion on my Kindle.
I'll let you read the description yourself, but I highly suggest this book. It is an incredible piece of work, and the way she portrays a rape victim's life after going back home. The emotions are raw, and if you have had a similarly traumatic episode then you may want to tread lightly when getting into this book.
(Because this book isn't fresh in my mind I can't give as detailed a review, sorry.)

OK, so before we get started let me specify that this is NOT the novel that the horror movie, The Descent, was based on. I don't know if that's what I was expecting when I bought this because I don't remember buying it, but I do know that I got it off of some recommendations list on Pinterest for "books you won't be able to put down."
That was a lie.
Maybe I was expecting a creature-feature style romp underground, although the setup certainly doesn't lend itself towards that ever happening. In fact, after having finished the book, I still feel like nothing has happened.
I'm not going to give you a synopsis of the book because I feel confident that you can click the picture and read the perfectly apt synopsis someone made for Amazon. Instead I'm going to tell you what I liked and disliked about the book.
The Book
I didn't like anything. The characters were one dimensional, which was only made worse by the Faulkner-esque jumping around of narrators. I didn't care about the poor, broken mother wandering through her own life thinking more about the twin she lost as a child than the child she lost like a month ago; I didn't care about the father who for some reason decided to become Clint Eastwood cowboying it up on some old guy's farm and developing tension with said old guy's younger son. (Said old guy's older son was the sheriff in charge of the search for the missing daughter. I'm still not totally sure why he felt the need to give his father this crazy man to take care of, especially after having just fallen off of a roof. But that's none of my business.) I REALLY didn't care about the brother, who is generally referred to as "the Boy" throughout the book, who begins wandering aimlessly through the central western US for no apparent reason. None. He is not looking for his sister. He is not trying to "find himself", he is just driving from town to town being useless to the story. And he takes up a LOT of the story.
Finally, there is the daughter, Caitlin, who I almost sort of cared about, but wasn't given enough time with to REALLY care about, and that's a shame. She also goes by "the Girl" most of the time, which made sense to me. Often times that absence of a name is meant to relay the attempt of a held person to "escape" their situation, or protect their "real" self from their captor. Cool, she doesn't go by a name, I'm fine with that. I'm more than  a little irritated at her brother for doing the same thing for no Goddamn reason.
I wish I'd had more time with Caitlin because the small amount of depth she was given implied that there was a lot to be learned. But only a Dixie cup's worth was given to me. So ultimately, I didn't REALLY care whether she escaped or was found or whatever.
The Writing
I hated the writing style. It was weirdly disjointed, in a way that is hard to explain. But here, let me try.
This guy rambles on about the scenery like he thinks he's Cormic fucking McCarthy. I GET IT- the mountains loom in the background. If half of that had been funneled into character development maybe I would have given a fuck about at least one person in the book. (NOTE - now that I'm thinking about it, I really did like the Old Man that the father went to work for. He was OK. But again, more one dimensional than I would like.)
The dialogue... Omg The dialogue. It is SO WEIRD. This guy doesn't use quotation marks the way he's supposed to and it drives me BATSHIT. Why, you might ask? Because he's always fucking rambling about the scenery like I'm suddenly reading 18th century French literature again and I'm trying to skim the bullshit and then realize I missed a conversation because he didn't use the punctuation he was supposed to use. Even worse is that SOMETIMES he DOES use quotation marks like he's supposed to, so it's sort of anyone's guess at any given point whether he's going to fuck with you or not. This, to me, is like waving someone through a four way stop when it is clearly your turn- follow the rules you Goddamned hippie.
Readability
This was painful to read. At first I kept going because, hey, a lot of great books have been slow to start. But nothing. Ever. Happens. Like at all. Just page after page of me waiting "for it to get interesting" yet it never does. If it had been a physical book there is an excellent possibility that I would have set it down at a doctor's office or somewhere and completely forgotten to pick it back up. I was more interested during the last 20% of the book in the leftovers I wanted to eat from the fridge than the story itself. To be clear, that includes the penultimate battle for the girl's survival as well as the outcome of said battle. Eating a cold egg roll was more satisfying than  finishing this book.

So, let's recap: I would never recommend anyone read this book. It wasn't that I don't like the genre because I've read plenty of missing kid books, and actually I find the idea of setting it in the Rockies really cool. But this was so poorly executed.
The Book
🥀 (a dead enchanted rose is basically a negative score.)
The Writing
🕯️
Readability
🕰️
Sorry, Tim, this was just a no go on all fronts.
at April 16, 2017 2 comments:

This Belle's bookcase has had a fairly busy start to the year. As of March 25 I've read 16 books. That averages to over 1 book per week, although in reality it wasn't that steady. Some books took me two weeks to read, while early in March I gulped down an entire trilogy in 7 days. (Awesome trilogy, by the way. I'll write more about it later.) My friends and I have been doing a book challenge, with different prompts for types of books to read, and that has forced me to reach outside of my comfort zone more, which is how I found the trilogy and ended up falling in love with a new author.
So let's catch up, shall we?

My friends and I decided to make our own book challenge this year. You may have seen these pop up on Pinterest, a list of prompts for what kind of books to read. I did one last year and it was really fun. It also opened me up to authors and titles I might never have tried otherwise. I'll post the list for you in another post, so if you're interested you can play along at home.

Sometimes I chose a book specifically for a category, while other times I read a book I wanted to read and then tried to shove it into a category for credit (that didn't always work.) The end result is a weird hodge podge of books, some worth it, others not so much.

The Rating System
So it's really hard to give a book just one rating, because sometimes I might like some aspects while hating others. So the system here is three-fold:
The Book
This is the overall rating- all things considered, how do I feel about this book? This is on a scale from one to five enchanted roses.
🌹  -  🌹🌹🌹🌹🌹

The Writing
A bad book might have really amazing writing, or vice versa, so this rating is solely for the writing style. This is measured by Lumieres.
🕯️  -  🕯️🕯️🕯️🕯️🕯️

Readability
Page turner? Couldn't put it down? Set it down to make Ramen and forgot I was reading it for weeks? This is how engaging the book is, and I measure it with Cogsworths.
🕰️  -  🕰️🕰️🕰️🕰️🕰️
at April 01, 2017 No comments: